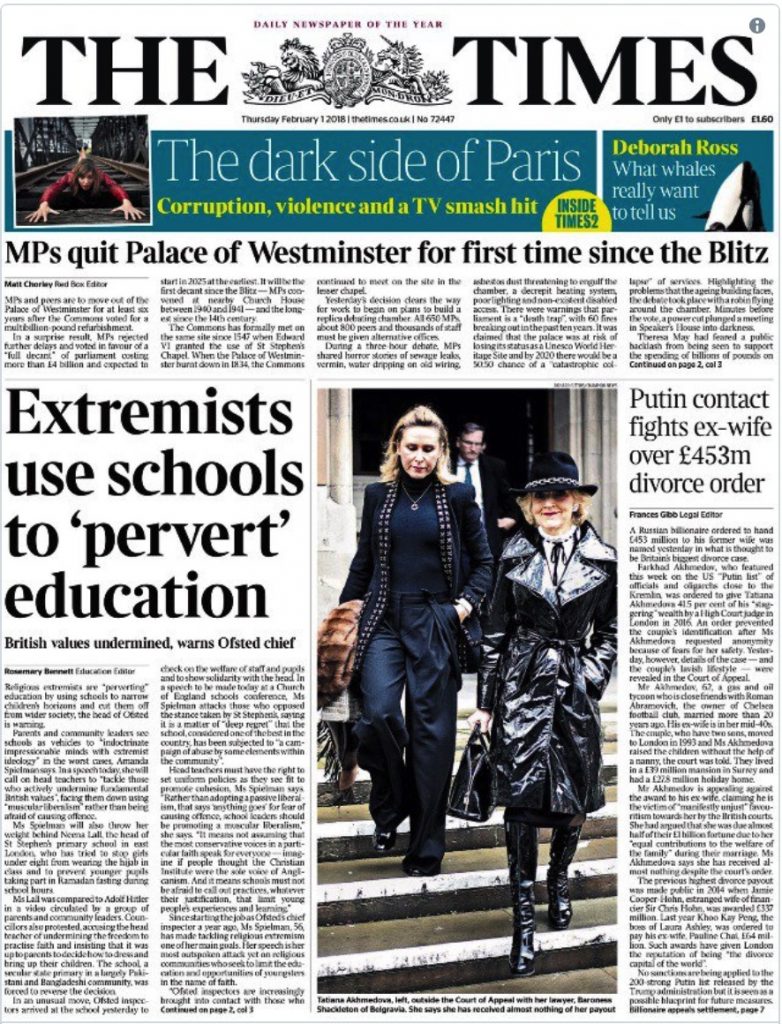 [5 February 2018] I was supposed to be writing about counter-narratives to Islamophobia. Amanda Spielman, the Ofsted chief inspector, decided on Friday to prove exactly why these are needed. Hot on the heels of her speech backing a hijab ban at an east London school came the launch of the review on the application of sharia law in England and Wales.

Well, it doesn’t just rain, as we know, it pours. Spielman’s speech alone contained several Islamophobic narratives. I turned down an opportunity to discuss the latest salvo from her on Newsnight, because, by 1pm I was exhausted by it all.

The news later that Darren Osborne had been found guilty of murder for his terrorist rampage in Finsbury Park last year was little succour given his intent to target and kill as many Muslims as he could onÂ Al-Quds Day, an event I have attended almost every year with my family.

I am 40-something years of age and I find myself asking where all the accountability has gone, and worse questioning whether any such oversight ever actually existed.

Whereas 30 years ago, a rogue headteacher such asRay Honeyfordcould cause a media furore with overtly racist comments, today, the very body that should be checking those abuses of power is committing them and embedding them across the education system with the largely confused or compliant media in tow (Richard Adams in the Guardian being the notable exception).

There was Trojan Horse, then Fundamental British Values and now Hijab.

I, and many others,write about it all the time– it’s the overlapping of the layers of state, its institutions, media, law making and law enforcing, education and political discourse.

Muscular liberalism, which Spielman invokes in her support of the hijab ban at St Stephen’s school, is code for supremacism and “illiberalism”. The school’s policy was overturned.

It was invoked by David Cameron in his disavowal of multiculturalism in 2011, and has poisoned political discourse ever since. It collapses the idea of Muslims as citizens and the idea of the Britishness of the majority versus the culture(s) of immigrants (be they Muslim, Eastern European or other).

It has also resulted in an unattainable Britishness, despite claims that the adoption of liberal mores is all that is needed for victimised ethnic and/or religious groups to end their victimisation.

Dressing up racism in the garb of tolerance isn’t just disingenuous (the caveat emptor here is less buyer more tenants beware), it forms the basis of dehumanisation and delegitimisation required to enact both psychological and actual violence against out-groups.

In Spielman’s speech on Thursday, she reiterated her campaign – perhaps crusade – against (according to her) “those who want to actively pervert the purpose of education. Under the pretext of religious belief, they use education institutions, legal and illegal, to narrow young people’s horizons, to isolate and segregate, and in the worst cases to indoctrinate.” These accusations could apply equally to her.

Her glorification of the St Stephen’s leadership team ignores the racist comments in support of the hijab ban from akey governor that led to his resignation. But the environment of hate we live in now is so rancid that Spielman faces no such pressures to leave.

Her speech on Thursday was simply an addition to what has gone before and it is a sustained attack on human rights norms and more particularly the equality laws of this country.

Instead the narrative of rights is subverted to claim the victims of violations (in this case by Ofsted itself) are abusers. It’s a familiar rhetoric which, especially during these recent years, we have heard again and again in the run-up to war.

Thursday’s speech was a statement of intent, a declaration of war, and a pre-emptive justification of the onslaught to come.

What is to come we know not yet. Bans, exclusions, more laws, more Prevent referrals? That is just part of the gamut of the state. There is then the incitement this rhetoric stokes.

In her speech Spielman didn’t just iterate ad nauseam the tropes of illiberalism and “fundamental British values” but also raised the spectre of perversity, an additional narrative of hatred – the sexually and politically aberrant – that some ascribe to Muslims.

Incitement, and more specifically who will be held to account for it, is relevant to the case of Darren Osborne. He committed the crime but it is clear he was provoked by what he watched and read.

The case was meticulously laid out as such, not by anti-Islamophobia advocates, to be dismissed by the cynics, but by the prosecution.

With all the racism around us, protesting for peace and justice in Palestine every year was a small bastion of calm where Muslims, Christian, Jews and people of various faiths and none could join together in common cause.

Today those coming together in this way are literally targets of terrorists, and have become so because alethal cocktailof some mainstream media, some far-right groups and activists and some Zionist media and campaigns joining together to demonise them as terrorists, thus “justifying” the attack pre-emptively.

In forthcoming work on counter-narratives to Islamophobia in the UK, there is a critique of liberalism. That tension at the heart of so-called liberalism is identified variously by Rowan Williams and Azeezat Johnson as losing its real meaning or indeed being in and of itself contradictory.

But what is repeated over and over again is the crisis caused when there is no accountability. What is left when even those who are supposed to ensure justice perpetrate injustice instead?

The Charity Commission spentthree years investigating Interpalover spurious claims that it supported Hamas but is still prevaricating over the case of UK Toremet and itsfunding of settlements in land occupied by Israel, as well as organisations providingmaterial aid to theIsraeli army. Interpal had been subjected to a media smear campaign before the investigation. LikewiseAl-Quds Day this year.

When Spielman first announced the programme to interrogate pre-pubescent girls as to why they wear the hijab, over 1,000 academics, community leaders and activistswrote a letter in protest.

There was little acknowledgement of the concern except to say that the interrogation was not meant to be of individual girls but of groups. It was really time to bow out with what little honour was left intact. Instead Spielman has declared war.

Spielman claimed on Thursday there was a campaign against the school leadership at St Stephen’s, but really is this what the rest of Britain is supposed to believe?

That government institutions, schools, headteachers and society at large are the victims of eight-year-old girls in hijabs who in turn join them as victims of their parent campaigners?

I will be continuing to call for Spielman’s resignation, though who will listen? It is clear it will take some time but other warmongers have also had to fall on their swords.

Messrs Blair and Cameron, from whose ideological symmetry and policies Spielman’s were spawned, finally had to go.

In the meantime I suggest if Spielman is really concerned about the sexualisation of young girls, maybe she should start looking at the causes of 5,500 assaults (including 600 rapes) mainly against girls and young women at school.

Unless of course she wishes to blame that on eight-year-old Muslim girls too. In which case, en garde once more.

– Arzu MeraliÂ is a writer and researcher based in London. She is one of the co-founders of the Islamic Human Rights Commission (https://www.ihrc.org.uk) and co-authored its recent studyÂ Environment of Hate: The New Normal for Muslims in the UKÂ with Saied Reza Ameli. She is currently working on the multi-partner project ‘Counter-narratives to Islamophobia Toolkit’ with the University of Leeds.