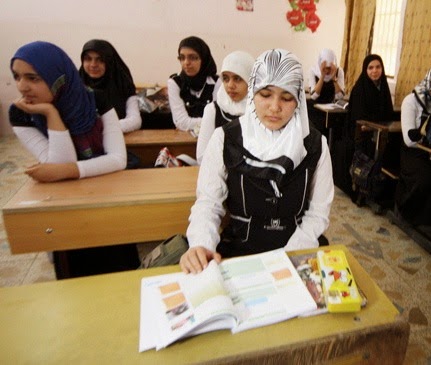 Last month the government schools inspectorate OFSTED launched a fresh wave of unannounced snap inspections of mainly Muslim-majority schools in the London borough of Tower Hamlets. Its findings, widely reported in the media, painted a picture of ideologically driven staff presiding over institutions where extremism flourishes, usually amid a diet of very narrow religiously-based curricula. OFSTED’s conclusions echoed official investigations into the so-called Trojan Horse scandal in Birmingham which had erupted earlier in the year after an apocryphal complaint about a plot by Muslims to take over 21 inner city schools.

Between the two episodes several other Muslim schools have been subjected to OFSTED raids with the same broad brush findings subsequently being made. However rather than demonstrating a genuine problem of extremism the government’s aggressive focus on Muslim-run schools suggests it has a problem with staff, parents and governors using educational institutions to instil and enforce Islamic values. This sudden surge of interest in Muslim schooling has not sprung from nowhere – it falls into a well-established social engineering programme that goes back at least a decade and has the assimilation of Muslims as its goal.

When at the turn of the new millennium the British government introduced the first ever ‘thought crime’ legislation on the mainland, critics attacked the Terrorism Act 2000 for its capacity to criminalise people simply for expressing certain kinds of dissent.

The purpose of the new powers – originally employed in Northern Ireland in the 1970s to deal with Republican opposition – was to make Britain a less welcoming place for foreign dissidents who were using it as a sanctuary to support armed resistance against repressive regimes in the Middle East.

In hindsight the Act has proved to be significant in two respects. Firstly it softened up the British public for the unprecedented erosion of civil liberties that has followed in the name of fighting the so-called war on terror.

However the Act also formed the thin end of a new strategy designed principally to tame Britain’s Muslims into becoming less dissenting and more deferential to government foreign policy regardless of how odious that policy may be. It was the seed of an unparalleled state-led social engineering exercise aimed at producing in the first instance a politically compliant Muslim community.

Legislation was just one weapon in the government’s armoury. By 2003 it had been supplemented with CONTEST, a counter-terrorism strategy which amongst other things, claimed to be concerned with targeting and eliminating the ‘radical’ views that inspire ‘terrorism’. Named PREVENT, this strand of CONTEST was rolled out extensively using public and voluntary sector organisations, community groups, educational institutions, local authorities, prisons, mosques and police forces.

By 2011, following a government review of CONTEST, it became clear that PREVENT would adopt a more aggressive attitude towards changing opinions amongst British Muslims. Henceforth it would no longer be enough to use counter-narratives to challenge ‘violent extremism’ – it was also expected that Muslims should also actively promote “core British values”.

Underpinning this intensification was an increasing xenophobia in political and social circles –mainly driven by immigration – that saw the religious values of Muslims as somehow at odds with mainstream British values (whatever they are). In the already highly charged security climate it was easy for politicians to misleadingly draw a connection between decades of multi-culturalist policies and terrorism. Multi-culturalism, it was claimed, failed to provide Muslims with any incentive to integrate and encouraged them to remain ‘different’ (of course the fact that widespread demonisation and discrimination was responsible for marginalising Muslims was conveniently ignored). Muslims were not integrating because they were different, ran the argument, and the source of this difference was their faith. It was now therefore not enough for the state to only fashion politically deferent Muslims but also secularised Muslims for whom religious values would no longer be the principal driver of thought and behaviour.

The recent witch-hunt against Muslim-run schools speaks to the government’s commitment to enforcing this strategy. Reports from all the schools to have been targeted in this year’s crackdown suggest that it has come to view education as a key area for the implementation of CONTEST. Concerns about extremism appear to be a pretext for removing Muslim governors and staff and stripping Islamic influences and practices from the management, teaching and curricula.

Consider the origins of the ‘Trojan Horse’ plot. Under normal circumstances an anonymous and implausible letter claiming to expose an alleged plot by Muslim extremists to Islamicise state schools would barely merit anything more than passing attention (the letter is presented as a plan of attack sent from a Birmingham circle of extremist plotters to counterparts in Bradford, instructing them how to carry out a similar takeover of Bradford schools, by hijacking boards of governors in state schools in mainly Muslim areas and removing opposition). Actually that is what exactly happened with the missive being bounced around between various council departments and West Midlands police. It was only when it found its way to the Dept of Education, then headed by the unreconstructed Zionist and Islamophobe Michael Gove that it began to be taken seriously. Within weeks the fabricated letter (which is strewn with inaccuracies) had been spun into a ‘Trojan Horse Plot’ concocted by Muslim extremists to seize control of British schools, and strategically leaked to the media with the aim of creating a national panic that would prepare public opinion to accept a government crackdown.

No fewer than four separate enquiries were ordered into the claims made in the letter, three of them by Gove himself. Gove has always had a problem with Islam. He is the founder member of Policy Exchange, a right wing think tank which has claimed that British Islam is being hijacked by extremists as well as the Henry Jackson Society, another right wing think tank which has little sympathy for Muslims, foreigners and non-whites. Gove’s 2007 book ‘Celsius 7/7’ was a plea for Europe to do more to confront what he calls ‘Islamism’.

Surprisingly enough none of the enquiries unearthed anything approaching the gravity of the accusations contained in the letter. But that didn’t stop Gove. Having found no evidence to suggest an extremist conspiracy to Islamicise pupils involving forced segregation, compulsory prayer and radical preachers, he moved the goalposts. In the words of the Guardian’s education editor Richard Adams, “the focus for investigation has slipped from extremism to ‘an awareness of the risks associated with extremism’ in the elided phrase now used by OFSTED inspectors to condemn the schools most heavily involved, such as Park View academy. In the process, the DfE’s definition of extremism has shifted from actual bomb-throwers to religious conservatives.”

The same scenario, in which Islamic values and not extremism appear to be under investigation, appears to be playing out in Tower Hamlets. Inspectors have taken issue with policy documents written by the Muslim Council of Britain describing how Muslim parents could be stimulated to press the “views and aspirations of Muslim parents and the local community” on reluctant schools and recommending that schools should not teach “potentially harmful forms of music” which “promote immoral behaviour” or include “unethical and un-Islamic lyrics”. Schools were criticised for failing to promote ‘British values’ or the primacy of British law. One school was judged not to be taking the necessary steps to protect pupils from “extremist influences and radicalisation” in failing to take action over a pupil who had posted on social media that fellow students shouldn’t attend a school leaving party because it involved music. Following the publication of OFSTED’s findings, staff and parents at one of the Birmingham schools were told by staff that they would be reported to police under the PREVENT strategy if they questioned whether an alleged new uniform policy excluded the hijab.

Inevitably, the price of the government’s ideological crusade has been disruption and damage to the education of innocent children. Prior to the government intervention, Sir John Cass Foundation and Red Coat Church of England Secondary School, the only state school among the seven in Tower Hamlets to be placed into special measures, had been lauded as a model recovery story in which parents, teachers and governors had turned around a failing school. In fact only last year a report into schooling in the borough, Transforming education for all: the Tower Hamlets story, hailed the progress the borough had made in transforming some of the lowest achieving schools in the country into outstanding ones – in 1997 only 26% of pupils gained five or more higher-grade GCSEs by Key Stage Four compared to a national average of 43%, but by 2011 that figure was up to 61.5%, well above the national average of 43%. Ironically, among the reasons identified by the report’s authors for the turnaround was schools’ excellent relationship with local faith groups in a borough where 55% of children come from a Bangladeshi background, as well as their efforts to make their workforces more reflective of the local population.

The reality is that government intervention in Tower Hamlets, as with Birmingham and other places before it, has left behind a trail of destruction from which the affected schools may never recover. Staff and governors who had been delivering excellence have been unceremoniously fired or left with no alternative but to resign, in some cases leading to massive staffing shortfalls. Hard-earned trust and relationships built up by local councils with Muslim communities have been destroyed as public officials are seen to be enforcing an Islamophobic agenda that has little to do with education. Perhaps the most devastating impact has been to render the targeted schools ‘toxic’, ensuring that all but the most determined and desperate parents continue to see them as a place to educate their children.

To a much lesser extent the enforcers of the new educational orthodoxy have also ruffled the feathers of other faith communities. In October the Beis Yakov Jewish girls school in Salford was placed into special measures by OFSTED for failing to teach the ‘British values’ set out by Michael Gove before his recent axing in a cabinet reshuffle. Other orthodox Jewish schools have protested about inspections in which girls from strict traditional backgrounds were allegedly asked whether they had boyfriends and if they knew where babies came from. The Church of England (which runs many Muslim majority schools) has also expressed disquiet over the way in which OFSTED is being used as a “schoolroom security service” to police aspects of school life that have little to do with education. In an essay by its chief education officer Nigel Genders, it warned against allowing a narrow state-dictated definition of ‘British Values’ to become a test of whether somebody is ‘safe’ or ‘loyal’.

It would be wrong however to draw too much equivalence between the attacks on Christian and Jewish run schools and the campaign against Muslim-controlled schools. Although both have their roots in rising right wing cultural chauvinism the targeting of the latter is part of a systematic and much more pernicious campaign of forced assimilation via the agency of an anti-extremism agenda. Education, it seems, has become the latest battleground in the government’s relentless attempts to shape a brand of Islam it deems acceptable in modern Britain – liberal, secular and above all state-friendly.