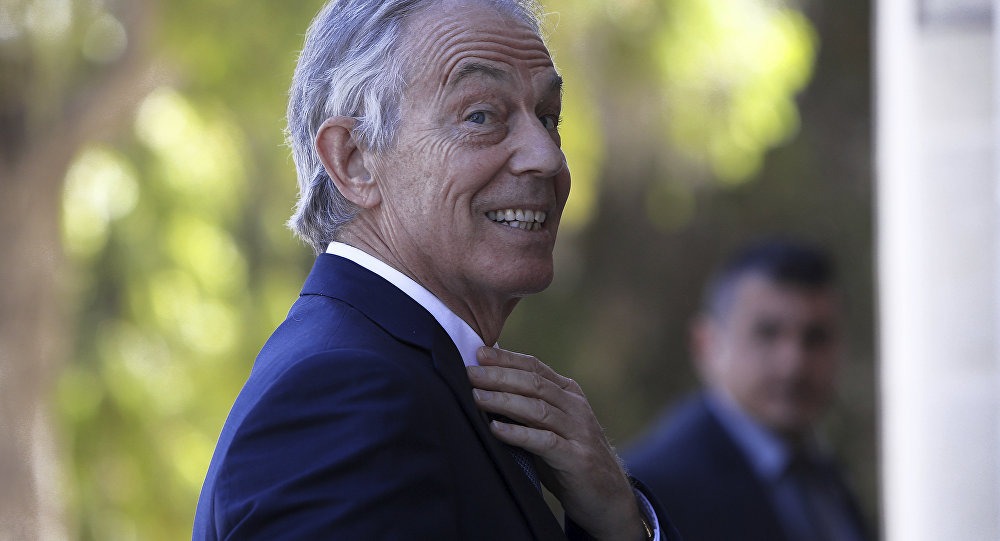 The widening crisis of British society is both led and masked by racist discourse against Muslims as evidenced in the TBI document.

In January this year the Tony Bair Institute published a report “Narratives of Division” that sought to “name and shame” Muslim organisations that it claimed fell into the (problematic) category of “non-violent extremism”.

Its publication could not have been any more timely since just weeks earlier IHRC published a briefing analysing how the label “extremism” was being used to elbow Muslim organisations out of policymaking.

The briefing stated that by rendering as Muslim organisations’ legitimate criticisms of state policy “extremist” the government and other opponents were squeezing the already attenuated Muslim CSO space.

“For the best part of two decades, successive governments and those opposed to Muslim participation have forced to the margins authentic CSOs from the Muslim community that do not conform to preconceived official strategies or desired policy outcomes,” said the briefing.

Cue Narratives of Division which falls squarely under the same criticism. The report sets out with the aim of “establishing” the extremism of prominent British Muslim organisations involved in campaigning, lobbying and policy-making.

At first glance, the organisations appear to have been selected on their basis of their resistance to political co-option and their strident criticism of state policies. They are CAGE, Hizb ut-Tahrir Britain, Islamic Human Rights Commission, Muslim Public Affairs Committee and Muslim Engagement and Development.

Using six key themes (Victimisation, good Muslim vs bad Muslim, Islam vs the West, delegitimising the government, the centrality of Islam in Politics and the justification of violence) it seeks to show the level of overlap between views advocated by the five organisations and the group al-Muhajiroun, banned under anti-terrorism legislation in the UK for advocating violence. Unsurprisingly, it concludes that much of the five groups’ public messaging approaches or is similar to that of Al-Muhajiroun.  Legitimate criticism is branded as extremist simply because the same types of criticisms are made by ‘violent extremists’.

It goes without saying that organisations’ criticisms of the state will overlap on many issues. For example IHRC often finds it views on the Prevent strategy echoing those of some non-Muslim civil and human rights groups/commentators but to brand them all divisive and dangerous is a non sequitur. In April 2016 the UN Special Rapporteur on the Freedom of Assembly, Maina Kiai, said that Britain’s anti-terrorism policies were counter-productive, undermining democracy and victimising the Muslim community. According to the logic underlying the TBI report, he should also be considered a non-violent extremist.

“Narratives of Division” is premised on the discredited concept of “non-violent extremism” which underpins the UK’s Prevent anti-terrorism strategy.  It seeks to revive a pledge made by David Cameron in 2015 to tackle those in the Muslim community who “quietly condone” extremism, who “don’t go as far as advocating violence, but who do buy into some of these prejudices.” The TBI reports says that Cameron’s “vision” has fallen by the wayside. It charges the five selected organisations with perpetuating narratives that promote a divisive view of how Muslims should see their place in Britain.

The trend towards branding Muslim groups “extremist” because they espouse anti-government positions is dangerous. In recent years, largely via the Prevent anti-extremism strategy, Muslims have been increasingly required to actively promote “core British values”. Accordingly, the definition of extremism has grown to cover non-violent extremism, something which was never originally part of Prevent. Now the government defines extremism as “vocal or active opposition to our fundamental values, including democracy, the rule of law, individual liberty and the mutual respect and tolerance of different faiths and beliefs”. The definition stretches the scope of extremist activity to draconian proportions, making it so wide that it is capable of ensnaring people who oppose government policies or hold “conservative” religious views such as disapproval of abortion, music or same-sex marriage.

IHRC finds the report tendentious and Islamophobic. It aims to establish a benchmark for extremism which is well below the threshold required to be able to legitimately express one’s views and which sets the bar differentially for Muslims.

“Narratives of Division” also deploys the good old-fashioned divide and rule tactics by trying to set up a binary of good Muslim/bad Muslim. The groups identified are “bad Muslims” who policymakers and government officials should steer clear of when engaging with the Muslim community. The aim seems clear – to prevent the named organisations from accessing policymakers by means of “toxification”. Label them extremist, marginalise them and thereby close the door on them to the corridors of power and influence and also delegitimise them in the eyes of fellow Muslims.

According to the report condemning or flagging up institutional Islamophobia is an example of a view which militates against social cohesion. It accuses the groups of pushing ‘us vs. them’ narratives, calling them “corrosive. This seems dangerously close to saying Muslim organisations should only be allowed access to policymakers if their views conform to a pre-determined acceptable range of opinion.

One only has to cast one’s mind back to the Macpherson report to see how the finding of institutional racism against the police did not lead to charges that racially minoritised groups were promoting a conspiratorial or divisive worldview. Yet today calling the state or part of it institutionally Islamophobic is presented as evidence that Muslim organisations are promoting a narrative of division.

The TBI report recommends pushback against “divisive narratives” to marginalise the named “extremist” groups, with the state asked to increase funding available to groups and activities that exist to combat “extremism”. It advocates promoting alternative narratives from an early age using schools as a medium. “The UK Department for Education should train teachers to facilitate discussions in schools on difficult issues, including religion and identity.” Here the report takes advantage of the opportunity to plug its own “robust toolkit for educators to lead these kinds of dialogues”. Given the content and aim of this report can only assume this means indoctrinating schoolchildren to think in non-critical state-compliant ways.

Last but not least, TBI’s funding raises questions over its independence and agenda. In 2018 Tony Blair Institute admitted receiving a £9m donation from Saudi Arabia. TBI, which is entirely owned by Mr Blair, says in its 2017 accounts: “In essence we support the countries and leaders we believe to be reformers, who are trying to transform their countries or wider region for the betterment of their people.” Such a statement seems incongruous given Saudi Arabia’s intensification of internal repression of political dissidents and the Shia minority, its role in the war against neighbouring Yemen and its much-publicised recent execution of the journalist Jamal Khashoggi as he visited the country’s consulate in Istanbul, Turkey.