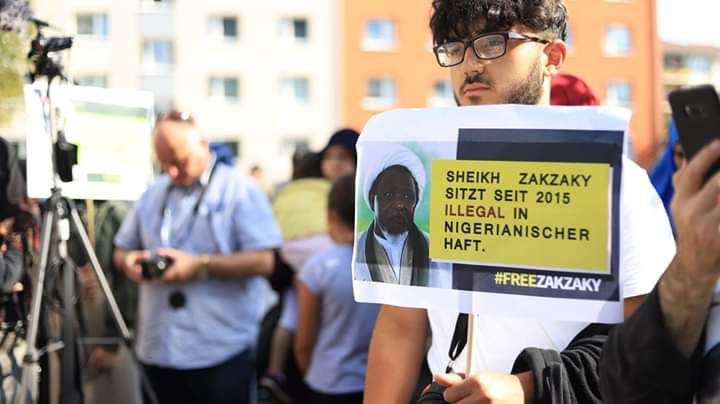 INTRODUCTION
Global #FreeZakzaky protests continued as Sheikh El-Zakazky and Mallimah Zeenah were forced to return back to detention in Kaduna. Last week Kaduna High Court granted leave to travel to India for medical treatment but Nigerian security services with the assistance of Indian authorities continued to victimise the leader of Islamic Movement in India.

The Free Zakzaky campaign page on our website is being reconstructed but you can already get links to the latest action, digest, press release and video / audio, as well as background and donation information, as well as some of the campaign archives there.  Please bookmark this page.

This week, we request campaigners keep the pressure on the Commonwealth Secretariat by writing emails/letters, demanding the immediate release of the Sheikh and all those unjustly imprisoned. Please forward any responses you receive to us on wajahat@ihrc.org and keep the pressure up by continuing to send follow-ups. A model letter is provided below in the Action Alert.

Click here to watch the message from IHRC chair Massoud Shadjerah about our fundraising and campaigning for those injured by police and army violence and the families of those killed. You can donate for Qurbani to help the families of those killed. Please CLICK here for more information to support the victims of police and army brutality in Nigeria and do share the fundraising video provided. They are in urgent need of our support please DONATE here and encourage others to do the same.

Click hereto send an email to the Commonwealth and demand their intervention in this case. A model letter and contact details of the Commonwealth are provided below. Please forward any responses you receive to IHRC at wajahat@ihrc.org.

Model email / letter
If you are emailing, please use the following in the subject line:
Commonwealth’s failure to act on plight of Sheikh Zakzaky

Dear Baroness Scotland QC,
Re: Commonwealth’s failure to act on human rights abuses in Nigeria
I am writing to ask for your urgent intervention and to apply pressure on the Nigerian authorities to immediately release the unlawfully detained leader of the Islamic Movement of Nigeria Sheikh Zakzaky and his wife Zeenah. They have been held in illegal detention for over 3 years.  You are doubtless aware of the details of his case.
I am deeply concerned about their safety and security.
I request your urgent intervention and to make the following representations to the Nigerian government immediately to:

I look forward to hearing from you, Yours sincerely,
[Your signature if posting]
[Name]

The Abortive Medical Trip of El-Zakzaky
18 August 2019
Listen to Massoud Shadjareh (from 3 minutes to end) discuss the reasons for the aborted medical trip of Sheik El-Zakzaky on Focus on Africa with William Niba on Radio France International. Click here to listen the message.

ALERT: Keep up pressure for the release of Sheikh El-Zakzaky and Mallimah Zeenah
17 August 2019
Sheikh El-Zakzaky and Mallimah Zeenah have been returned to detention in Kaduna.  IHRC remains concerned for their well-being and asks campaigners to take action by calling on the Nigerian authorities to guarantee their safety and stand by the various court orders for their release and travel for medical treatment.
Click here for the alert details and the model email.

EVENT: NIGERIA / UK – Free Zakzaky Protest called on Friday 16, 4-7pm London
15 August 2019
A protest was called outside the Nigeria High Commission, London, UK on Friday 16 August 2019 to demand that Sheikh El-Zakzaky and Mallimah Zeenah are released immediately on their return to Nigeria so that they can travel for urgent medical treatment.

UPDATE: NIGERIA / INDIA – Sheikh El-Zakzaky asks to return home after mistreatment and harassment at the hands of Nigerian and Indian security
15 August 2019

Sheikh El-Zakazky and Mallimah Zeenah have stated they will return to Nigeria rather than continue to be harassed and denied the medical care they require in India.  Video statements in Hausa and English have been released by the Sheikh and will be made available below.

The actions of the Indian authorities in facilitating the harassment of the couple at the hands of the Nigeria security services is extraordinary.  The restrictions placed on the couple seeing their own medical team, lawyers, advocates and even friends has meant that the couple have lost all faith in the process. Click here for more details.

Reports reaching us indicate that the Nigerian government, in collaboration with American and Indian governments, have continued the persecution of the leader of the Islamic Movement in Nigeria, Sheikh Ibraheem Zakzaky in the Indian hospital.

In an audio recording of the Sheikh in India, he talked of the worst form of persecution that he had never ever experienced in all the 13 years of his incarceration by successive governments in various prisons and detention centers in Nigeria. “Even worse than Kirikiri maximum security prison”, he said.
Click here for more details.

IHRC is deeply concerned that the Indian government appears to acting as a policeman in the Kaduna district of Nigeria.  They appear to have collaborated with Nigerian security services. Click here for more details.

ALERT – INDIA / NIGERIA: Demand India respect the rights of Sheikh El-Zakzaky and Mallima Zeenah
14 August 2019
Indian police / security services appear to be working in collaboration with Nigeria security services, and effectively imprisoning Sheikh El-Zakzaky and Mallimah Zeenah in hospital in New Delhi.  To watch a short video on the current situation please visit this page or watch it at the end of the page.
Click here for more details and the action alert / model email.

Sheikh El-Zakzaky & Mallimah Zeenah arrive in Delhi
13 August 2019
The Sheikh and Mallimah have just arrived for medical treatment after three and a half years of detention without charge. For more information on Sheikh El-Zakzaky visit here.

PRESS KIT: Who is Sheikh El-Zakzaky? – Challenges to the Buhari Narrative
13 August 2019
The papers provide (i) an overview of the background of the movement (Caterina Aiena); a discussion of how the ‘Shia’ label and narrative is a label used by the Nigeria authorities to demonise and mis-characterise the movement and the Sheikh for different audiences (Arzu Merali); (iii) and overview of the legal campaign with a focus on the submission to the International Criminal Court regarding the Zaria Massacre of 2015 (Abed Choudhury); and (iv) an overview of the campaign to secure his release since 2015 (Massoud Shadjareh).
Click here for more details.

UK Sit-in – Free Sheikh Zakzaky, Nigerian High Commission, London
12 August 2019
In light of tonight’s news that Sheikh Zakzaky and Mallimah Zeenah are en route to India for medical treatment, the sit-in outside the Nigerian High Commission has been suspended. However campaigning for full justice for the Sheikh and all those who have faced turmoil and tragedy at the hands of the Nigerian government.

Australians Enlist Support For Sheikh Zakzaky
10 August 2019
Just as the leader of the Islamic Movement in Nigeria, Sheikh Ibraheem Zakzaky had predicted that applying force against the Movement would only make the light of his mission reach every nook and corner of the World, Australians have been the latest to demonstrate their support for Sheikh Zakzaky.

IHRC chair Massoud Shadjareh said: “This is a long overdue decision and we hope that the Nigerian executive expedites matters to make their departure smooth and unproblematic. We look forward to their prompt release without forgetting that there are still approximately 150 members and supporters of the Islamic Movement of Nigeria still in detention.” Click here for more details.